I had an opportunity to give a speech about how we can automate performance testing in CI/CD pipeline in a conference held in Istanbul for the first time "Test automation and Digital QA Submit Istanbul, #TAS19". My subject was "Automated Performance Testing", the first part of the speech is to explain what is performance tests.

What is Performance Testing By Definition

Performance testing should be also executed in a process. Performance engineers should ensure that they collected requirements, created the correct amount of virtual users, created test scenarios and they can execute them. As a final, they should check the result and the system, if required after fixing, re-execution may be needed. 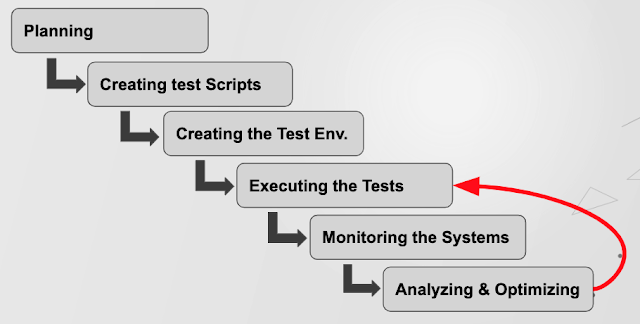 In the monitoring stage, you should check that the execution is happening as expected by checking the system. The performance scripts create requests which are reached to the related part of the system and they create related data on the databases/caches. Which means that your scripts run as expected.

In the analyzing stage, you can check the result and if necessary you can fix some configurative, network-related or database-related problems. After that if necessary, you can get ready for the next iteration. These iterations should keep going until the desired level of confidence is gathered.

Types of performance testing depend on the strategy that applied during the test by means of the loads, the duration and increment of the load.

Soak test is to test the upper boundary of the system for a prolonged time. Soak is good if you are not sure the expected amount of the user for some occasions.

Spike test is to test the behavior of the system when the amount of load is suddenly increased and decreased. It aims to find system failures when loads is changing to an unexpected amount.

Capacity testing is aiming to find the maximum amount of the user that the system can handle. By this test we can find the how many user can use the system.