December 31, 2019
Automated testing is running the tests and reporting results by tools with scripts. Automated performance testing is designing the performance test scenarios to run them spontaneously by tools and evaluating the result by tools to decide to go or not to go further.

What Types of Performance Testing Should be Automated

Since the load test is aiming to the response of the system under a specific load and it is a success belongs to the pre-defined metrics, load testing is the best-suited performance testing type.

Performance testing depends on two main parts. The first part is creating loads and the second part is using these loads for test scenarios. When it comes to doing automated performance testing, we need more tools

A Way of Implementation of K6 for Automated Performance Testing

K6 is an open-source performance testing tool. It is designed for developers, it gives us many good features to run tests in a safer, faster, easier integrated way. Very easy to integrate it to CI/CD.

Some of the Good Features of K6 are
K6 has rich libraries that you can use in the script. The request is sending by HTTP from k6/http. Grouping is letting you run the same kind of request in a group. Check the simple test scripts which have get requests to the three URLs and post requests to register endpoint with dynamic data.

Command-line supports many parameters to run your scripts. For a load test, we have fixed virtual user and fixed test duration so the run script should look like

For a spike test, we should load the system with a nominal load and the load should increase suddenly. Let’s focus on at the --stage option for this.

The K6 sends the results to the InfluxDB, we can virtualize this data with Grafana. You can use the dashboard created by the LoadImpact 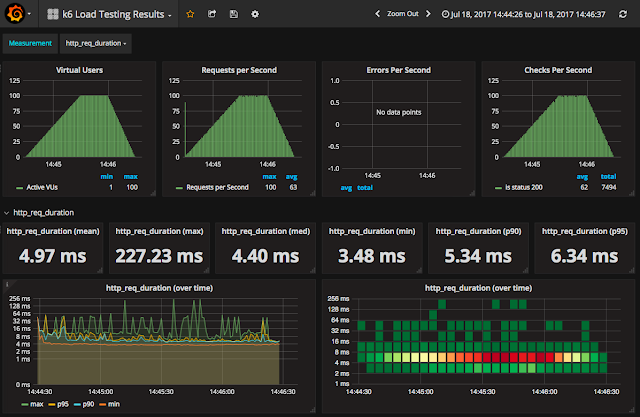 Add these scripts to your CI/CD pipeline to run an automated performance test and see the result in Jenkins. To see all the scripts and data check this repo on Github