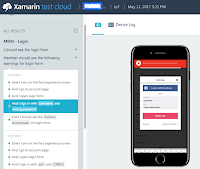 If you are testing your application against emulator / simulator, you will still have risks that the expected features may possible not work on several real devices. To handle the real device testing you should have many devices to run your tests. In the current market, we have lots of possibilities for device and operating system versions combinations. Best approach to find most used devices, you should use some statistical data. Most of the cases Pareto analysis can help for selecting high coverage devices. However if you want to find more bug before release, you can focus on the newest device with latest OS version and the oldest devices with the oldest OS version. Any case you should have at least 5-10 android devices and 3-5 iOS devices for a good level of coverage in the beginning. Therefore managing the devices is another problem if you want to have your own local test suites. As a good alternative you can use the cloud services. In this post I want to share some information about running Calabash test on Xamarin Test-Cloud.

Xamarin Test-Cloud supports X-platform frameworks so you can use same feature files for both iOs and Android project. However you should submit the code with providing the profile and the config files in your command. If you have your own Calabash project then you are ready to submit your code to test-cloud. 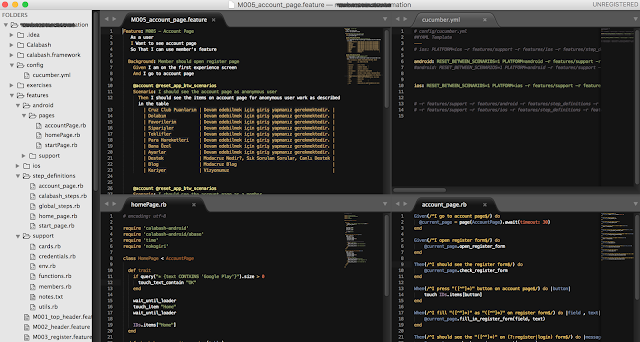 Go to Xamarin Test-Cloud and open and account, then you will get 3hours X 30days free usage. Click "New Test Run" and create platform specific devices group. At the end of the creation select "Calabash" then it gives you complete command to submit test-cloud. To run test-cloud you need to install `xamarin-test-cloud` gem by the following command:
If you are not using X-platform, you submit the code with the following command:

For X-platform example, you submit the code with the following command:

As I have explained in my previous post Calabash-Android and Calabash-iOs is differentiated by architecture becauseof the platform dependency. These commands are directly applied but for iOs project you need to have a new target as -cal and it should be built for device. Then you should produce .ipa files from this target. To produce .ipa file you can run the following command:

Then you can submit your iOs project with newly created .ipa file:

Then you see the progress in the console or web, on the console it gives the result and the url to reach the project on Xamarin Test-Cloud. The Xamarin very friendly user interface to see the failing test cases. 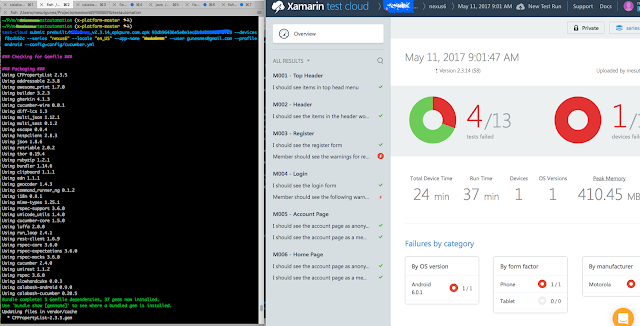 One of my favourite features of cucumber is to handle test cases with tag, but Xamarin has not implemented the tags options but they suggesting the the using categorisation. By adding the command  `--include CATEGORY-NAME` for Nunit test. However I could not satisfy with this feature, hope to solve it.

Answer for running with tag option came from stackoverflow, you can add the tag you want to run at the config file like `--tag @regression`

The final word, this is where the cloud testing takes advantages, you can run the same scripts with many devices in parallel. 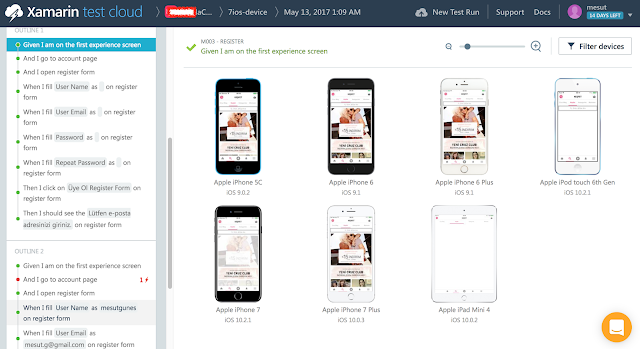