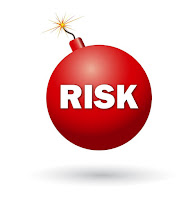 Recently I have had lots of interviews for QA Analyst roles in the company. We called engineers from the level of beginner to senior test engineers for these roles. One of the most important questions in our interview is for understanding why we are testing. Actually this question is more about the philosophy of the testing, as we think the philosophy is generally not liked by people, but everyone who does something about a subject everyday from 9 to 6 should think about why he does this job. I wonder whether the testing job is just only to feed himself or he has some other passion about his profession. That's why this question is very important for me. One of the training given by Ståle Amland which is "Exploratory Testing – Risk-Based Agile Testing", he explains the philosophy of testing as epistemology of testing and he is saying that "all good testers should  practice Epistemology", see these slides in his training:

In this post I want to explain my thought about test and risk.

If you have not tried to answer this question, it is time for it. The simplest answer to this question is “because there are risks”. Everything started in favour of reducing the risks. You never know how much risk you would take if you took a production to live in front of real users. Therefore we should always consider the Risk while we are testing anything. Risk Based Testing helps us to construct an approach for including risks into testing effort so risk based testing is not an method or technic, it is an approach that you use it while applying any testing technics.

Risk is general terms for the probability of failure, see the definition here. However, in terms of testing in software industry, Risk is the probability of the damage that can be occurred by a failure in live. Therefore it has two parameters: the first one is the probability of a defect, what steps produces the defect, how much percentage of the user might possibly see it; and the second parameters is the damage, when a user see it how the system responses for further action. So let's define the formulation of risk:


Let's look at an example for calculating risks. For e-commerce web application, We have the following cases:

Let's assume that the following defects we have in the production, these are most probably the major defect so they should be solved asap but they are good examples for calculation:

Defect 1: User can not add an address when he goes to the step of selecting address
Defect 2: User can not use the bonus of X type credit card on check-out step

Analysing the Risk Factors for Defect 1:

Likelihood: We need statistical data that can helps us to predict user behaviours, let's so the data converting from analytical tools.  1/10 users adds new address during order; 1/20 newly registered user who doesn't have address so they have enter new address; 1/100 users add new address from his membership page, that functionality works good. Let's 1000 users use the system and 1/10 users order products.


Damage: The cost of failure changes depends on the sector that the application used by. In general it could be money lost, reputation decrease, causing injuries or even killing people. For e-commerce we can think about money and reputation lost. This defect stops the purchasing process, so we can give the highest point of damage. If scale the damage from 1 to 10, this should be 10. However this classification should be agreed with all stack-holders, for more about this look at about test strategy in this post.

Analysing the Risk Factors for Defect 2:

Damage: cost of failure should be same with defect 1 by assumption for the damage of defect 1. Damage should be 10.

This is just an introductory post and the next post will be related to "Risk Based Testing".